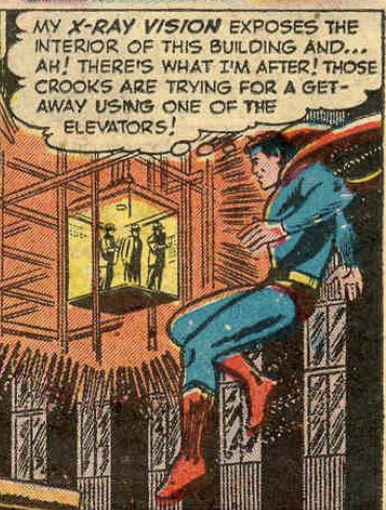 In Superman #73 (Sept 1951), “Perry White vs. Clark Kent!”, Clark gets promoted to managing editor of the Daily Planet and has to compete with Perry White who gets a job as editor of The Dispatch. While an interesting enough story, I thought it was more interesting that we get to see the first glimmerings of Curt Swan’s Superman in this story.

I’ve mentioned several times how much I dislike Wayne Boring’s Superman… What’s that, you say? You don’t know what I mean? Oh, I’m talking about this barrel-chested, dis-proportioned, wooden, emotionless clod:

So I was quite delighted to see Curt Swan’s Superman so early, even if the inking was all mis-aligned in that story… unfortunately Swan quit DC comics soon after this issue and only came back near the end of the 50s…

I should give props to Al Plastino, who also pencilled a story in Superman #73 and shows a couple glimmers of trying to break away from Wayne Boring with his own style that has glimmers of the original Joe Shuster style that spoke so strongly of force and action: