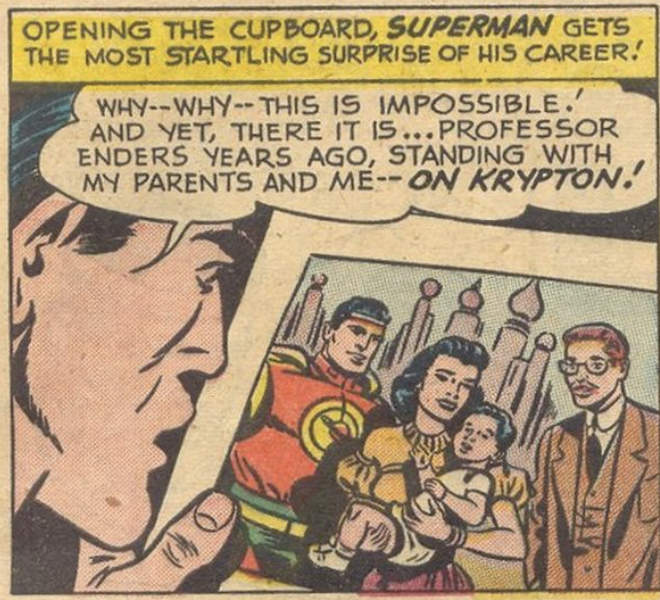 In “The Man Who Went To Krypton!”, a story from Superman #77 (May 1952) written by Bill Finger, Superman discovers that a human had visited Krypton in the past.

Thirty years ago, Professor William Enders intercepted radio signals from Krypton (which must have traveled through a time warp?) and learned how to communicate with Jor-El on Krypton. Jor-El instructed Prof Enders on how to make a matter transporting machine which can instantly teleport matter and arrives on Krypton.

Prof. Enders works with Jor-El to see if Kryptonians could evacuate to Earth, where they would be super-humans due its lighter gravity and different solar radiation. This is the first time that I’ve seen Supermans’ powers attributed to a different type of sun (though Krypton’s sun has not yet been depicted as a red sun).

While there, Prof. Enders was subject to Krypton’s heavier gravity, which took his toll on him, eventually requiring him to leave Krypton.

If Jor-El could make this machine, why didn’t he manufacture them by the thousands and evacuate his people, or at least his family earlier? I guess he thought he still had time to convince the council. The story does mention that by the time the radiation had built up on Krypton, the matter-transmitter was now useless, so the story is not completely filled with plot holes!

Prof. Enders kept the science of matter-transportation a secret, as any good scientist with the knowledge to completely transform society and solve many world problems should do:

A criminal comes across the machine, and of course, as evidenced by stories of three years ago, any smart criminal will use the teleportation machine to create alibis for criminals by shooting them across the continent.

Superman foils the plot, learns of Professor Enders past, and then decides to stash the matter-transporter in a safe place: