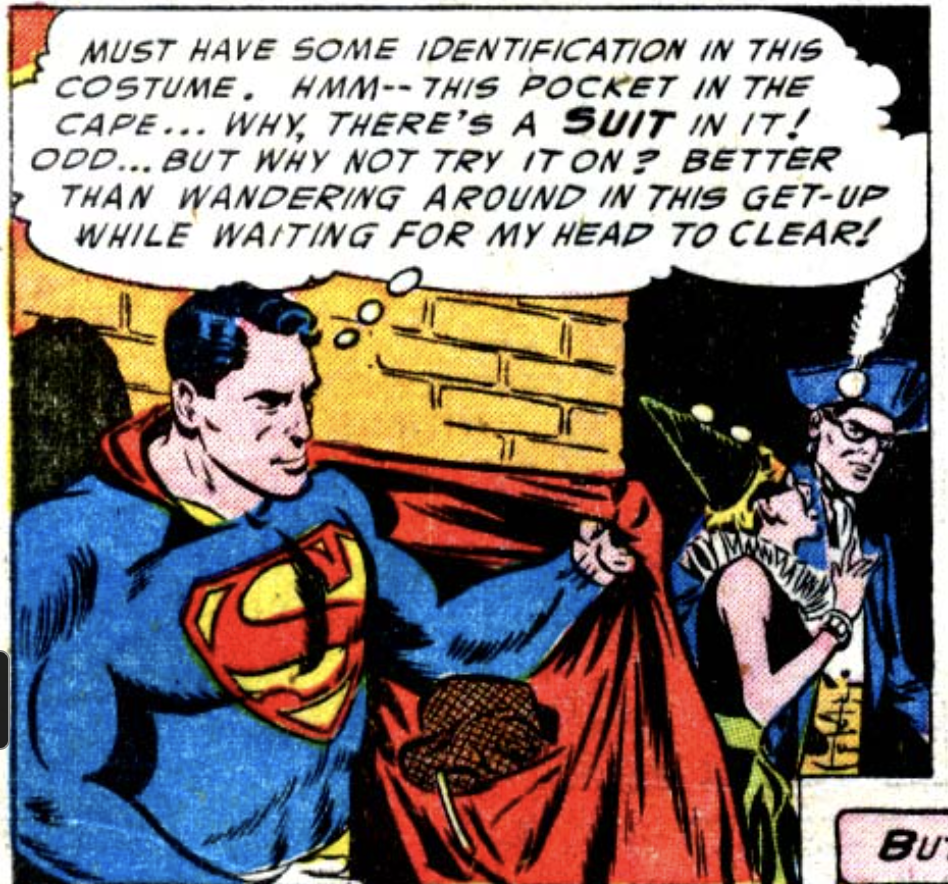 Well it’s been a couple years since we’ve had a prominent Superman-gets-amnesia story, so it’s time for World’s Finest #68 (Nov 1953) and “The Menace from the Stars!”. In this story, Superman saves the planet from an asteroid by smashing it and forcing it into a steady orbit around the Earth.

Unfortunately, a spectroscope reveals the asteroid contains elements of a “variety of kryptonite”. After crashing back to Earth, he wakes up at a costume ball and realizes he has forgotten his identity. He discovers that his cape has a pouch containing a suit of clothes.

Superman changes into Clark Kent’s clothes and wanders into the Daily Planet, where folks there help him through his amnesia, telling him that he is Clark Kent and that Superman is either dead or missing from attempting to destroy the asteroid.

On his way to a doctor, he encounters a holdup. Thinking that criminals might stop at the sight of Superman’s costume, he changes into the garb. The criminals shoot at him and Clark reasons that the suit must be bullet-proof. The world-at-large is relieved that Superman survived the asteroid.

What follows is a montage where Clark discovers that, as long as he’s wearing Superman’s costumes, he appears to have Superman’s powers. He quickly re-learns about super-strength and the ability of flight as he stops tidal waves and other disasters caused by the orbit of the asteroid.

Superman destroys the asteroid, saving the day. The President plans to honor Superman, but Clark – still thinking he is an imposter – decides to come clean and reveal to the world that Superman died and that it was just him using Superman’s costume. On his way to the Daily Planet, he is struck by a truck and falls onto some electrical wires..

Clark realizes that he has Superman’s powers even without the super-suit. This triggers his real memories to return and everything is reset back to normal.

This story was re-done in the 1960s. What do you call that, a cover-version of the story? As a kid, I had a collection of Superman stories in paperback form, and this was one of my favorites. In that version of the story there was more emotion, since the world thought that Superman was dead for much longer.