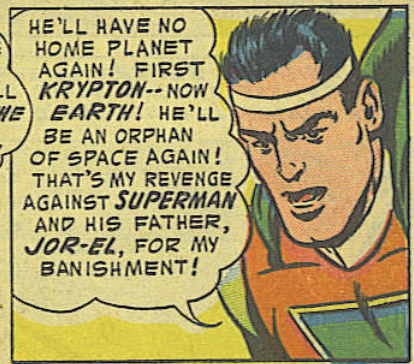 Four years after defeating and exiling U-ban, Kizo and Mala, Superman faces off again against the three evil Kryptonians in Action Comics #194 (May 1954). After their prison ship collides with an asteroid, the trio are freed and Mala decides to head to Earth to get his revenge on Jor-El’s son, Superman. Mala disguises himself as Superman’s friend “Clark Kent” and hi-jinks ensue. Mala kidnaps Lois Lane and a bunch of famous landmarks like the Eiffel Tower.

Lois wakes up in what appears to be a deserted Paris, France and Superman proceeds to recklessly destroy the planet by bombarding it with asteroids. It turns out that Superman realized Mala had created a fake Earth with fake landmarks on the other side of the Moon. Why do so may Superman villains have the ability to create decoy planets?

Superman imprisons the three Kryptonians in their rocketship again and this time bombards it with kryptonite pebbles (using his super-breath) to keep them imprisoned for good this time… suuuure!