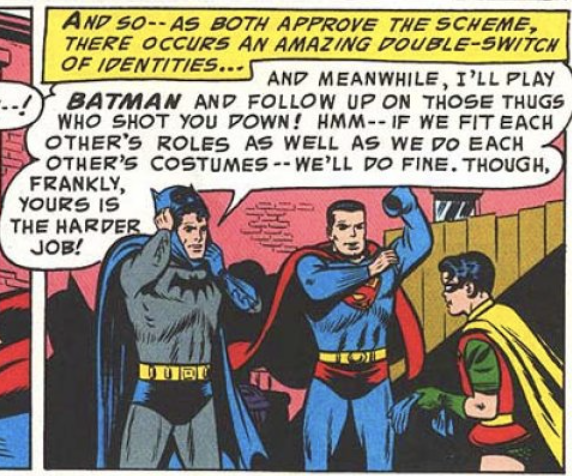 In World’s Finest #71 (May 1954), DC changes the format of its comic from a giant 68-page grab-bag of stories for only 15 cents, to a 28-page comic for only 10 cents. With the number of stories drastically reduced, DC came up with brilliant idea to take the Superman-Batman team-up story and make it the headlining feature of World’s Finest going forward.

Unfortunately this first World’s Finest team-up story is both un-inspiring and even-more-implausible. Clark Kent detects that Batman and Robin are about to crash the Batplane into Metropolis and rushes into his Superman identity in front of Lois Lane to save them.

At least it is firmly established that Robin is in on Superman’s secret identity, bringing the # of people who know that fact to two. The dynamic duo spend the next couple days convincing Lois that Bruce Wayne is Superman so that she will delay her news story to check her facts. Wat? Meanwhile Superman is still in a kryptonite coma… for two days! Lois eventually stumbles upon “Batman” still lying on the floor, presumably covered in his own bat-filth.

The ensuing confusion ends up sending a weeping Lois Lane to a mental institution. Ok, I may have made that last part up!