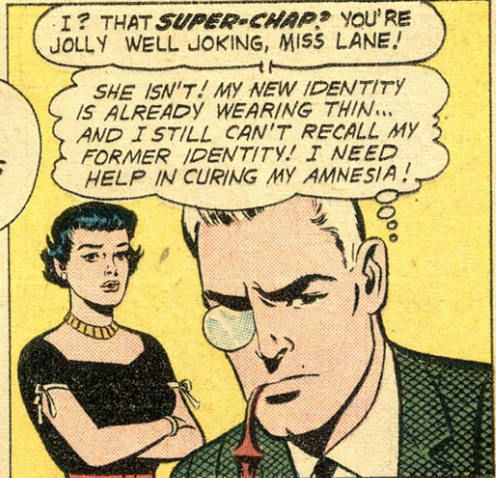 In Superman #126 (Nov 1958), Superman gets super-amnesia again when he decides to spend Clark Kent’s vacation on coming up with a cure for Kryptonite in his Fortress of Solitude. A freak explosion wipes out Superman’s memory. After quickly learning about his powers, he instinctively flies back to Metropolis where he decides to take on a new identity of the stuffy and British Clarence Kelvin. He also “instinctively” seeks employment at the Daily Planet where he meets Lois Lane, who naturally becomes suspicious immediately.

To recover his memory, he seeks out scientists who unsuccessfully try to shock it out of him, browses a museum of past Superman exploits, but nothing seems to work. Then hits on the idea of creating a giant lens, flying out in space faster-than-light and watching his old exploits as the light catches up with him. Seeing him change back into Clark Kent shocks his memory back to normal and he returns to Earth to set things right again.

And the regular Metropolis Mailbag letters column is starting to pay off. In it we get a readers clamoring for a super-team as well as Supergirl: