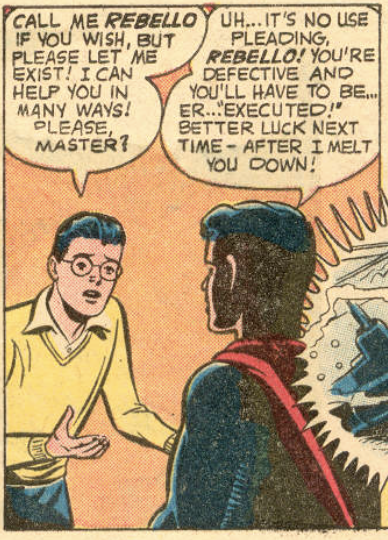 In Superboy #72 (Feb 1959), Clark creates an extremely life-like robot, one that is nearly indistinguishable from the real Superboy, complete with its own wants and desires. Unfortunately it turns out to have one flaw: the robot is left-handed. So naturally rather than fix that bug, Superboy decides to destroy the robot for fear of accidentally revealing his secret identity. When the robot dodges his heat vision, Superboy names him Rebello. Eventually Rebello’s rebellious nature gets the better of him and he crashes into the moon, presumably to his death.

It always makes me chuckle when I see the supposedly noble heroes casually disposing of things-that-could-be-alive out of convenience. Bizarro comes to mind too. Someone should have explained the Duck test to these characters!