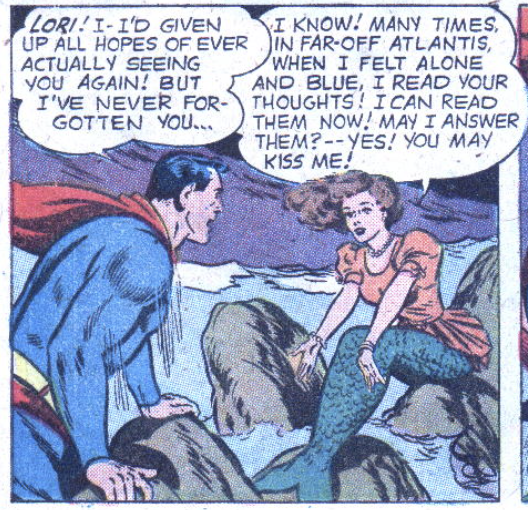 In Superman #135 (Dec 1959), Lori Lemaris returns thanks to a big fan reaction to her first story. This sequel story, “Superman’s Mermaid Sweetheart”, was written by none other than Jerry Siegel. I have an affection for this story as it appeared as one of 5 Superman stories from the Silver Age in a paperback that I had as a child.

Clark happens to hear a report from a sailor that he found a mermaid. It sparks a memory of Lori Lemaris and the description sounds a lot like her. Superman ends up finding her again using thought projection and is, apparently, still in love with her.

Nice. He then insists on taking her out on the town as Clark Kent, which is nice until she is reminded that she can’t dance with him. Taking her back to the ocean, Superman makes an impulsive proposal of marriage, offering to give up his surface life to be with her. I guess it’s lucky Supergirl showed up on Earth to give you that luxury, huh Kal-El!

So she agrees to go to Atlantis to ask permission. The next evening she returns with the joyous news that they will be married, but wouldn’t you know it, good ol’ Hans Schmidt the vengeful sailor catches up with her and tries to punish her by injuring her dolphin with a torpedo, but it hits Lori and she is gravely injured! Despite the Boring-style artwork, Superman is livid, dramatically calling after him “If the woman I love dies, there will be no corner in the universe where you can hide!”. Whoa, that was pretty dark and actually interesting, Superman!

Superman races Lori to Atlantis, where he is rushed to their hospitals, but they state that she will be paralyzed for life. He refuses to accept this and scours the universe for a cure. It’s not clear how long this takes, but two panels later, he discovers an alien planet with mer-people who claim they can help the injured girl. Superman crafts a bubble of water and carries the mer-doctor across space.

A tense operation happens, days pass, and Lori is fully cured! She comes out with a sad expression at the prospect of getting married, and Superman spies on her with his X-ray vision to discover that Lori and the mer-doctor-alien have fallen in love. Superman is understandably furious. I mean he did spend two whole panels searching the universe.

Then he gives her one final kiss, wondering if it was pity or love in the end, while the mer-doctor-alien looks on in a semi-smug way.

As I mentioned above, I do have a serious affection for this story because of the nostalgia it brings me, but I also think it touches on aspects of Superman’s character we don’t see that often – his willingness to give up his mantle as Earth’s champion, his ability to get swept up in emotion, etc. If this was a modern story this would be at least a four-issue story arc, so it’s pretty amazing that they pulled this off in just 10 pages – with 2 pages used on a flashback to when Lori and Clark first met!