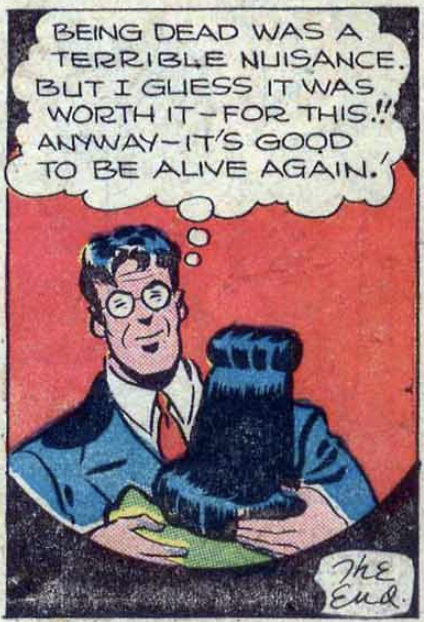 In “The Death of Clark Kent” from Superman #42 (July 1946), after returning two months earlier than expected from an arctic expedition, Clark Kent gets caught in a sewer gas explosion in front of Lois Lane. To protect his secret identity, Superman is forced to make it appear as if Clark Kent has died. This would be a heavily revisited trope in Superman stories over the years, since it’s a great opportunity to shake the characters up.

While Lois grieves, Superman sets up a new identity, Kenneth Clarkson, and tries to make it as a cub reporter for The Gazette, then as a waiter, then as a door-to-door vacuum salesman. Lois later learns that the man who died must have just looked like Clark Kent, because Clark should still have been in the arctic, Superman is relieved to return to his identity. In the last panel, with his wet hair and relieved grin he appears very off-model.