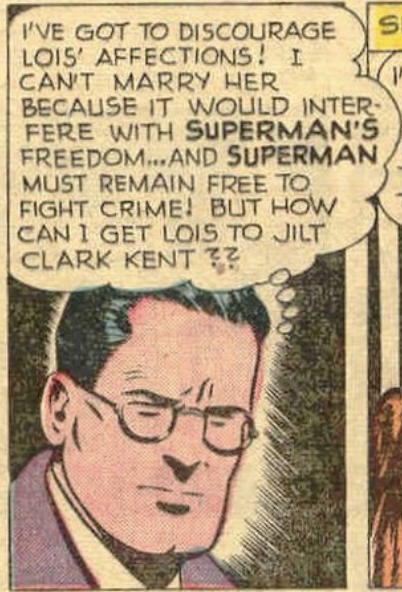 In Superman #58 (March 1949), the writers of the Superman comic visit, for the first time, a story in which Lois Lane actively tries to break her Super-Crush on Superman. On the advice of a doctor, Lois Lane tries to break her obsession by transferring her love to Clark Kent, which apparently seems to work much to everyone’s surprise. Lois buys Clark gifts, compliments him, lets him take her out on dates, and sends him notes.

Eventually, Clark figures out a way to piss her off by scooping her on a story at the Daily Planet, leading to Lois demanding that Clark find a different job:

So Clark found a way to reset everything. About the only thing that surprises me here is Lois seemingly putting her career over Superman.