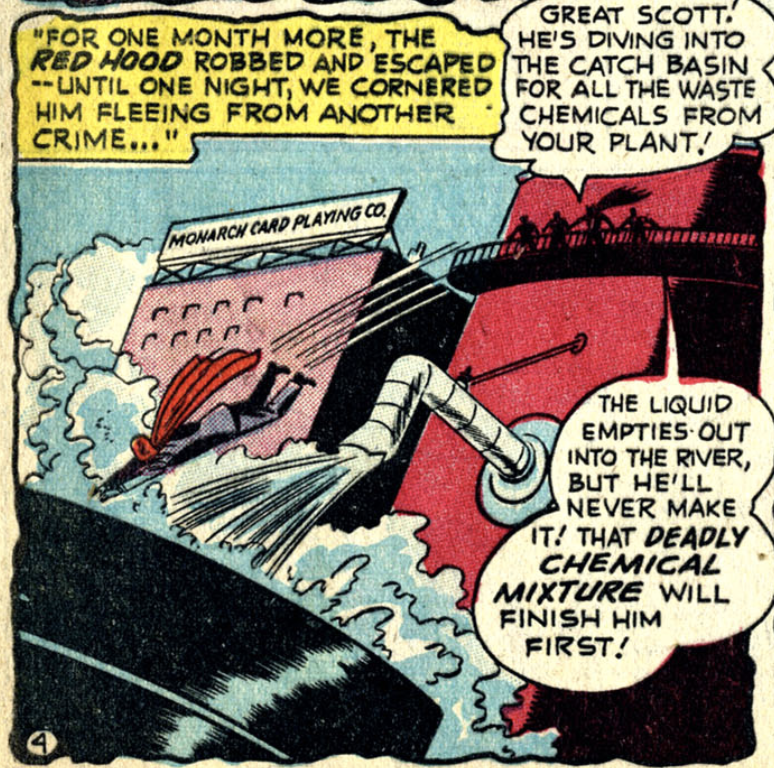 In Detective Comics #168 (December 1950), the Batman reminisces to a college class in criminal deduction about the Red Hood, a criminal that Batman failed to catch ten years ago. In their final encounter, Batman had chased him from a playing card factory and the Red Hood dove into a vat of chemicals to escape.

In the present, the Red Hood re-appears, prompting Batman and Robin to chase him down and deduce his identity. In the course of it, they capture a lock of charred hair. While using a chemical on it to attempt to restore its original color, the hair turns green. Batman and Robin conclude the chemical formula must have been incorrect.

Criminal, playing cards, vat of chemicals, green hair. That’s right, DC has finally given an origin to The Joker. It seems like even though the hood is supposed to be a gas mask and a diving helmet, the Red Hood was affected by the playing card waste chemicals, bleaching his skin, staining his lips, and turning his hair green.

I prefer the “vat of chemicals” explanation for the Joker’s appearance. This origin stuck with the Joker for years and was adapted into Alan Moore’s amazing graphic novel Batman: The Killing Joke and partially by the 1989 film Batman. The vat of chemicals also features in the Suicide Squad (2016).

The 2019 film The Joker offers a different origin story for the character, one in which he is a trodden-upon mentally-ill person who snaps and takes revenge on society. His appearance is fabricated and deliberate. Spoiler Alert! While the performance by Joaquin Phoenix was incredible, I didn’t like the premise of this film in two major ways: 1) there was no evidence that this Joker character would ever be clever enough to outwit a future Batman and 2) Thomas Wayne was depicted as a mega-douche-bag who was probably the Joker’s father – making Batman and the Joker half-brothers.