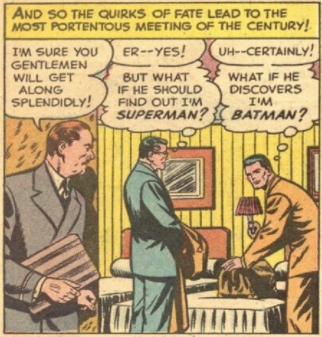 Although this isn’t the first or even second time that Superman and Batman meet in comics, Superman #76 (March 1952) is the first time the two heroes share an adventure together and learn each other’s secret identities. Written by Edmond Hamilton and drawn by Curt Swan, it’s a pretty cool story and it’s one of those that permanently changed the continuity and future stories for both characters.

It all starts when Clark Kent and Bruce Wayne decide to take a steamer ship vacation and wind up in the same cabin. They both need to change into their costume and guess what happens:

The heroes don’t take a lot of time to address this immediately, but race into action together – the World’s Finest team-up begins!

Once the forgettable menace has been resolved, the heroes realize they need to have each other’s backs:

There is some fun with Lois Lane too: Lois makes Superman jealous by making a play for Batman. And the duo dispel Lois’ suspicions by having Superman race Batman to Gotham to make an appearance, while Bruce later disguises himself as Clark Kent while Superman is present. Lois takes her revenge by taking Robin out for dinner instead of Clark or Bruce. Nice team work, y’all!