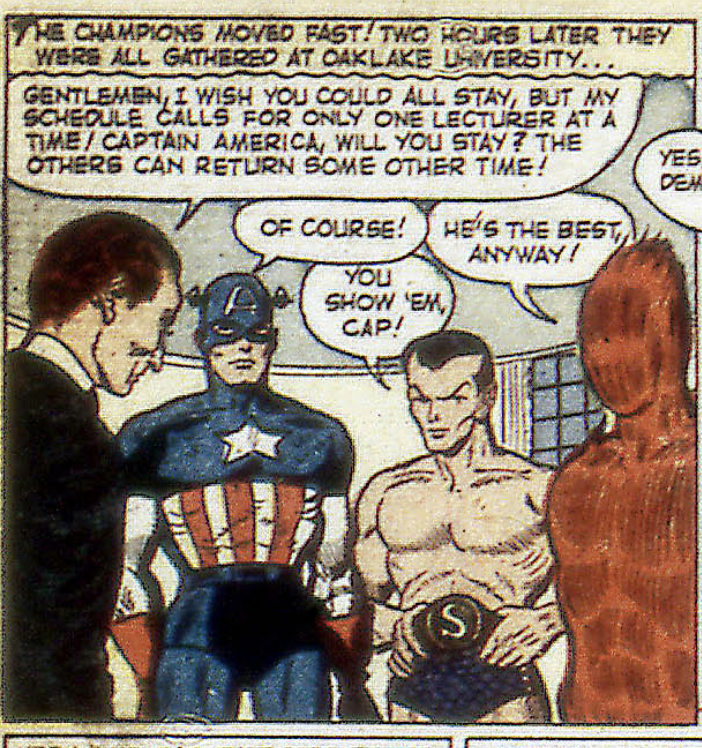 In the Captain America story in Young Men #26 (Dec 1953), a sneaky Kremlin secret agent calls together all the heroes in the Atlas/Marvel universe to fight the Reds, giving them the name “Champions”. By this time, DC had given up on the Justice Society of America three years ago and, apart from a Batman/Superman team-up and a Superman mention in a Wonder Woman story, have seemed to dismiss the idea of combining hero continuities, so it’s a treat to see Atlas/Marvel doing this, even if only for a couple panels!

An even tastier treat is to see Captain America infected by a virus and brainwashed briefly into working for the Reds, because we get another Bucky slap:

You know, I had read a bit about Atlas / Marvel’s 1950s attempt to revive their Golden Age superheroes but it’s much more ambitious than I had envisioned. There seems to have been a somewhat enthusiastic attempt to make these heroes relevant, give them colorful villains, and think about team-up strategies far ahead of what DC did when the Silver Age finally burst upon us.