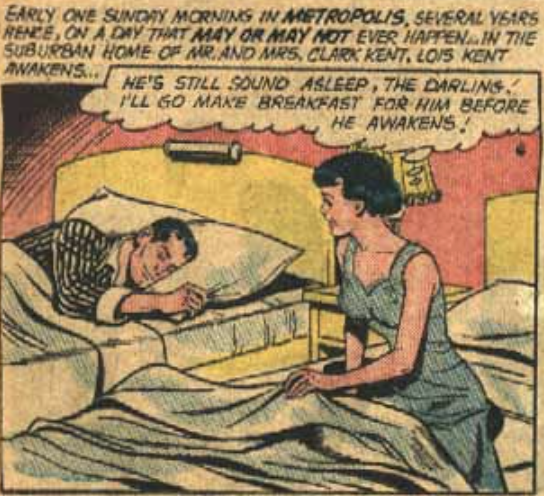 DC has been teasing Lois marrying Superman/Clark for a solid five years or so and it’s always a reveal at the end to be a dream or a fake-out. In Lois Lane #19 (June 1960), we get our first up-front “imaginary tale” of Lois marrying Superman/Clark complete with separate TV beds. The tale has the unwieldy name “Mr. and Mrs. Clark (Superman) Kent!”. In fact it is very clear at the beginning with lots of “would-be” and “could very well happen in the future” and “which may never take place, remember!” :

Superman always gave the excuse that his enemies would target Lois, or Lois would accidentally give away his secret identity to the world. Well, I guess he forgot about that last part or maybe he realized that Lois was more trustworthy and competent than that. She is good at protecting his secret (and really what else was she going to do?). In this imaginary story (and aren’t they all?), Lois and Clark have a house with a secret trap door just like he did as Superboy.

She helps Clark hide when he needs to act as Superman. Distracting folks by yelling that her clumsy husband has locked himself in a vault, then after Superman saves the day, “rescuing” him.

But it’s not all rosy. Lois mourns that everyone thinks her husband is the world’s biggest loser. She has to grin and bear it when a hot new actress jumps on Superman and plants a big kiss, exploding in a tantrum later at their house.

More than a real story, this first imaginary tale is a series of vignettes to show that Lois does a great job at helping Superman keep his secret, yet she’s shallow enough to be miserable about hiding how great her husband really is. The story leaves on a bit of a cliff-hanger with Lois claiming she is “so unhappy” and Superman saying “at least we have each other”.

I do find it fascinating that this trope of Superman hiding his identity from the love of his life lasted so long, with the writers not being brave and figuring out that after 22 years a new thing was needed. In fact it takes them another 36 years to finally make it official in continuity!