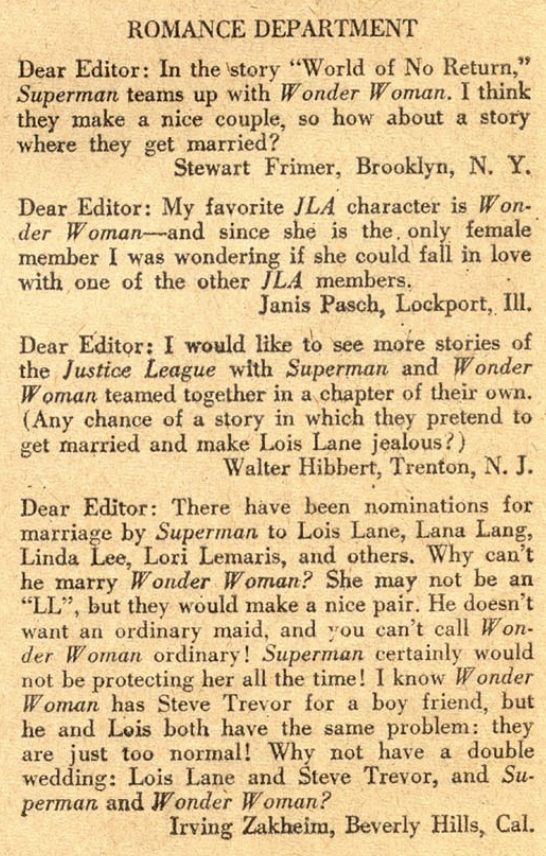 Ok, so I wasn’t the only one that had a visceral reaction to Superman and Wonder Woman in action together! The letters column in Justice League of America #3 (Dec 1960) featured several letters from readers who wanted to see more of this particular pairing, including having Superman and Wonder Woman actually marry and get rid of those pesky, yet convenient love triangles.

DC decided to give the Wonder Woman and Superman romantic pairing a serious shot during the whole “New 52” era when every character got a modern reboot, but that fizzled out when DC came to their senses with “Rebirth” and restored the marriage between Lois & Superman, giving them a child which sort of makes it permanent. (Now why in all that’s holy would I say something like that about comics?!?)

Anyway, speaking of the heart wants what it wants, I noticed another letter in the same column from a Jerry Bails. In his letter he lauds the creation of the JLA, gives a report from his “little friends in the neighborhood” on which heroes are hits, and goes on to talk about how he was a big fan back in the JSA era. Who is Jerry Bails, you might ask? Well I didn’t know this until I googled it after reading his letter, but Jerry Bails is considered the “Father of Comic Book Fandom”. DC has proven comic book fandom is alive and well in their letters columns over the last couple years, but Jerry along with Roy Thomas and more helped spread and popularize it through fanzines containing cool interviews and the like during the 1960s. Here’s a cool page that gives some more insight into who Jerry Bails was from his wife of many years. Pretty cool archaeological find!