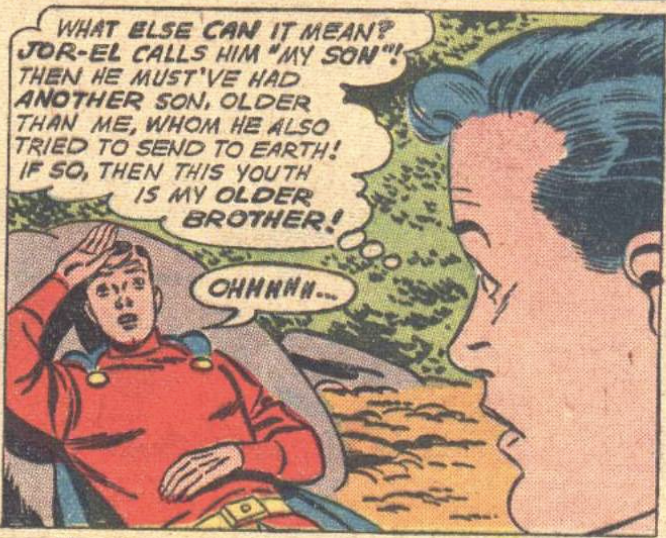 Superboy #89 (April 1961), expands the Superboy/Superman/Legion mythos yet again by introducing another important character: Mon-El, also known as Lar Gand. After crash-landing on Earth, Superboy rescues the amnesiac young man who seems to have all the powers of a Kryptonian, carries a letter written in Kryptonese from Jor-El, and a locket expressing their love and affection from Jor-El and Lara. Superboy makes the natural assumption that Jor-El and Lara must have had two sons and that this man is his older brother, naming him Mon-El since he was discovered on a Monday.

Sound a little familiar? This plot was heavily recycled from a Superman comic nine years ago. Anyway, after a few adventures, including the Kents giving Mon-El an alter ego of Bob Cobb, a traveling salesman, Superboy begins to get suspicious of his own concocted story and decides to test Mon-El with kryptonite while he’s sleeping.

Superboy discovers that Mon-El has no negative reaction to kryptonite (hm, nor the lead shield either). Mon-El’s apparent deception upsets Superboy so much that he decides to lay a trap. He paints a bunch of lead balls to look like green kryptonite, has Mon-El follow him to a planetoid where the green balls bombard, proclaims the bombarding “meteorites” are kryptonite and that they are both doomed, and then when Mon-El collapses and claims he’s suffering, he confronts Mon-El.

The massive exposure to lead has unblocked Mon-El’s amnesia and he reveals the truth: He is a Daxamite who happened to visit Jor-El and Lara on Krypton years ago. Superboy has lethally and permanently poisoned the poor, innocent man with lead. Knowing no other recourse, Superboy turns the Phantom Zone projector he recently acquired onto Mon-El, sending him to the Phantom Zone where the poisoning is halted, promising to free him eventually. Mon-El later becomes a major part of the Legion of Super-Heroes.