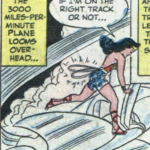 The last appearance of the Justice Society for more than ten years occurs in All-Star Comics #57 (December 1950) with “The Mystery of the Vanishing Detectives”. It’s mostly a bland story about a crime syndicate boss named The Key, but I did find it interesting that a panel featuring Wonder Woman’s invisible plane describes it […]

The cowboy continues to replace the superhero in September 1948, as DC’s All-American Comics follows “More Fun” out of the superhero genre. It gets a name tweak to “All-American Western” and a new cover star: Johnny Thunder. This means no more solo stories for Dr. Mid-Nite in the Golden Age. Green Lantern still has his […] 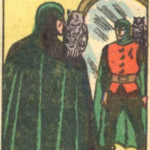 Doctor Mid-Nite suits up and makes his first appearance in All-American Comics #25 (February 1941), bringing the superhero count up to three in that magazine alongside Green Lantern and the Atom. Doctor Mid-Nite was a real doctor who was injured by gangsters, discovered he could only see in the dark, and decided to tackle those […]