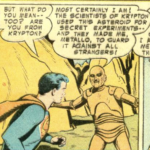 Speaking of Kryptonian robots, Superboy #49 (April 1956) features another one that Superboy discovers while trapped on an asteroid that is surrounded by kryptonite dust, trapping him there. The robot has the name “Metallo”, which is later used for a series of Superman villains. 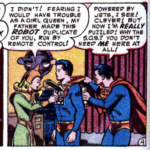 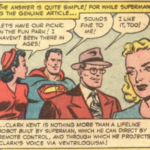 Superman may have started using his robots recently, but “Mrs. Superman!”, a cute story in Superman #76, makes the debut of Superman using a robot to specifically trick Lois Lane who has the notion that Clark and Superman are one in the same. 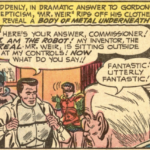 The parade of robots keeps on coming, with Batman #70 (February 1952) featuring a robot that functions as a cop and tempts Commissioner Gordon into replacing Batman and Robin. While Robot-Man has been around since 1942, he was actually a cyborg (a human brain in a robot body), much like the 1980’s Robocop, yet the […] 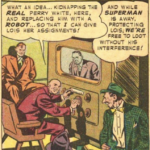 It wasn’t just Superman who was experimenting with life-like robots, it appears that Luthor was also doing so in Action Comics #166 (January 1952). Luthor kidnaps Perry White and switches in his robot duplicate to send Lois to dangerous assignments to keep Superman busy. Robots seem to be popping up in every comic book by […] 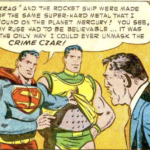 Throughout the 1950s, Superman and Superboy often used a series of realistic robots to deceive Lois/Lana or others about Clark’s real identity. Action Comics #165 (December 1951) could be considered the first such use of this literary device. In it, Superman meets “Krag” a superman from the planet Mercury who joins up with criminals. Turns […]