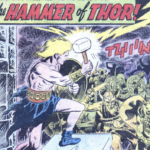 In The Brave and the Bold #3 (October 1955), Jon the Viking Prince rescues Captain Olaf from Baron Thorvold using a hammer he claims he finds in the sea and claims it is Thor’s. Unfortunately it is just trickery and not really Mjolnir. [Yup, three years after starting this blog, and over 8 months since […] 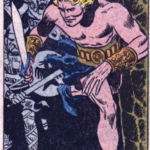 In June 1955, DC premieres an important new anthology comic book: The Brave & The Bold #1. Starting off as an anthology series, the book features three new heroes plucked from historical fiction, the best of which is The Viking Prince. The other two were Silent Knight and the Golden Gladiator. The Viking Prince was […] 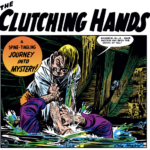 Wow, my 500th entry! It’s hard to believe I’ve been doing this for almost two years! I’m happy to see that I’m well into what I am calling the “Early Silver Age”, where many of the horror and science fictions stories are interesting, even if superheroes themselves have faded down to just a few exceptions. […] 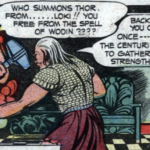 In Whiz Comics #50 (December 1943), Thor and Loki make an appearance over in the Ibis the Invincible story. Loki appears to cause mischief and Ibis summons Thor and his hammer Molnir to deal with him.