In July 1952, EC Comics debuted a new comic: Mad! Filled with anthological stories from multiple genres with a silly bent, it eventually morphed into a satire magazine, rather than comic book and became the only surviving EC comic in just a few more years. One story is horror, one is crime, one is western, […]

As with Twilight Zone and Star Trek, the best EC stories had social consciousness as an under-pinning. Shock SuspenStories #5 (July 1952) features just such a tale, titled simply “Hate!”. Written (of course) by William Gaines Jr and Al Feldstein, it features a jew-hating neighborhood in America and focuses on John Smith, the “protagonist”. John […] 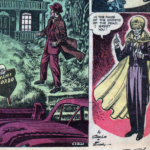 Atlas (Marvel) Comics had quite a few publications (more than DC) throughout the Golden and Early Silver many of which were driven by Stan Lee. In the anthological Adventures Into Weird Worlds #11 (July 1952), a one-shot villain named “Swami Mordo” makes an appearance, who shares a name and some characteristics of one of Doctor […] 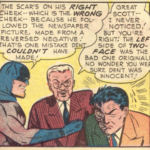 Detective Comics #187 (July 1952) features another story featuring Two-Face, featuring the now-rehabilitated Harvey Dent, less than a year since the previous not-quite-Two-Face story. This time, Harvey Dent agrees to portray Two-Face in makeup, but then exhibits signs of his old criminal behavior. It turns out to be George Blake, the theater manager, who thought […] 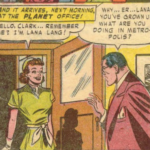 Lana Lang makes the leap from Superboy to adulthood in “The Girls in Superman’s Life”, a story written by Edmond Hamilton in Superman #78 (July 1952). Lana wants to become a journalist and heads to Metropolis where Perry White is convinced to give her a shot. Lois Lane takes her under her wing and Lana […]

In Superman #78 (July 1952), Bill Finger expands the mythos of Krypton with his story of “The Beast From Krypton!”. This story brings another survivor of Krypton, this time a savage beast that Jor-El basically genetically modified to ravenously eat metals and then imprisoned on a moon. When it arrives on Earth, as all things […] 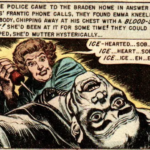 The Haunt of Fear #14 (June 1952) continues EC’s march into gruesome territory. The story “Take Your Pick!” features a cold-hearted, penny-pinching husband who refuses compassion at every opportunity. After turning away beggars and destitute friends, sending a dog to sleep outside in the winter, driving on by someone who was hit by a car, […]

The Phantom Stranger makes his debut in DC’s Phantom Stranger #1 (June 1952) and was created by John Broome and Carmine Infantino. The character is unnamed and not given an origin, simply appearing across 3 different stories of people encountering supernatural events. In each story, he debunks the supernatural aspects as hoaxes and solves the […] 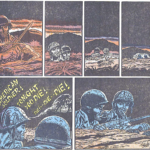 In June 1952, DC launched “Our Army At War” #1. In it, the tale “Dig Your Foxhole Deep!” written by Robert Kanigher and drawn by Irv Novick features many panels empty of dialog but filled with dread and psychological warfare. Our Army At War also features a letters column, which may be the first DC […]

In Detective Comics #185 (May 1952), Batman loses his utility belt which contains a pin that, when sprayed with a special chemical, will reveal Batman’s identity. Batman thinks this is a good idea because something might also happen to Robin. Ok, but isn’t it more likely that you’ll die and then reveal your and Robin’s […]