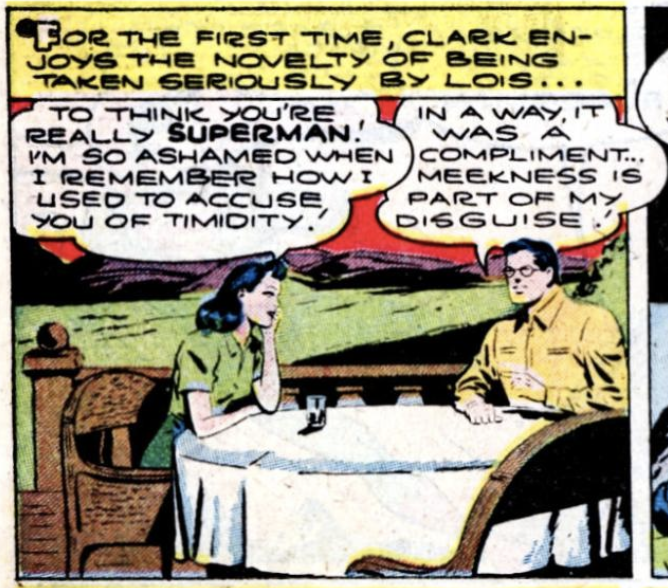 Throughout the eighty-plus years that Superman has been around, Lois Lane has discovered Clark’s secret identity probably dozens of times. But in Superman #34 (March 1945), Lois discovers his secret for the very first time. In what can maybe be considered the first “imaginary” story, Clark sees his future in a crystal ball and learns that, in the future, Lois discovers his identity when he is forced to change into Superman to save some people.

What’s interesting to me about this whole mythos is that, ignoring the “New 52” reboot, comic book Lois Lane has known Clark’s secret for twenty eight years (since 1991) – over a third of the time that Superman has existed. Hell, they’ve been married for twenty-three years! That means at least a whole generation of comic book readers have never known a “clueless” Lois, except from the variety of other media out there telling the Superman story. This is basically the writers admitting that they’ve wrung all they could about this phase of Lois and Clark’s relationship and that it was time to permanently change it – this never happened with our previous legends (like Robin Hood or King Arthur or Aladdin).

My all-time favorite Superman-Lois identity “reveal” in any media is Smallville’s “I’m the Blur” scene (which was not actually a reveal, since Lois already knew!). In fact, I’ll go on the record as saying that Smallville’s Lois and Clark are my all-time favorite portrayal of these characters thus far – mostly for the chemistry… the show was pap a lot of the time, but that last season really honored the fans of the Lois and Clark relationship (barn scene anyone?).