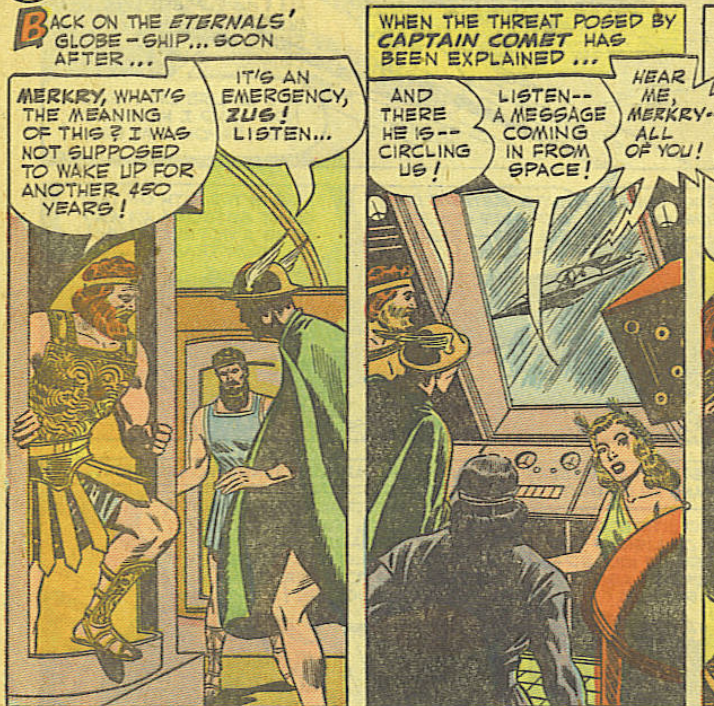 Zus has the idea to create a spaceship that will let them wander the galaxy searching for the secrets of immortality. Every fifty years, one of them wakes up from suspended animation to scan for evidence of an alien race that unlocks the secrets to everlasting life and then they go test it by, for example, shooting the alien scientist and seeing if he survives. Captain Comet encounters this group and stops them from menacing alien civilizations every fifty years.

The more I read and sample stories from the comic book past, the more I see future influences on later famous stories. In this case, “Secret of the Twelve Eternals!” definitely makes me think about the classic Star Trek episode “Who Mourns for Adonais?“.

I also notice that the writers have turned Captain Comet from an Earth-based superhero into a galaxy-spanning adventurer (yay!) who apparently doesn’t use his advanced knowledge of science to better his own planet’s civilization or make space travel commonplace (huh?). It’s same kind of problem of having Superman using his powers to solve mundane bank robbers, but oh well, it makes for some cool story possibilities!