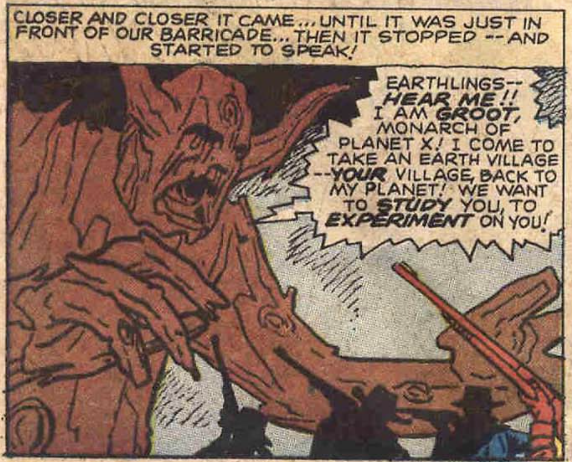 Groot! Yes, that tree-creature from Guardians of the Galaxy! In this first appearance, Groot is your typical alien-monster affair from Atlas at the time. It’s not until many decades later that they decided to re-introduce him as a main character in the Guardians of the Galaxy re-boot and eventually turn him into a movie star.

I think Groot is the fifth character published chronologically to appear in the Marvel Cinematic Universe (after Captain America, Bucky Barnes, Red Skull, and Jimmy Woo… I’m ignoring the cameo Human Torch in Captain America: First Avenger). Of course I’ll have to revise all that when Namor makes his MCU debut… Well at least one could say that Groot and Jimmy Woo are the first Silver Age characters introduced in the Marvel universe chronology, though both pretty minor characters at that.