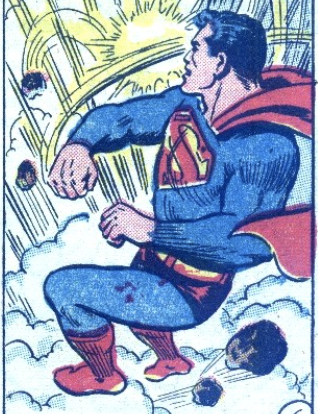 In Action Comics #189 (Dec 1953), the formidable team of Edmond Hamilton (writer) and Curt Swan (penciller) team up again – so it seems like I was wrong that Swan left DC soon after “The Mightiest Team in the World!“. The story is kind of meh, but what I love about it is the breath of fresh air that is the Curt Swan Superman, since I’m so tired of the Boring one. Finally Clark and his friends get to have some emotions on their face!

This story is about a rich elderly couple whose lost explorer son looks exactly like Clark Kent. So much so that the couple wants to meet him – and maybe adopt him!

So of course, there is a doctor nearby to warn Clark that refusing such a request might result in the wife “dying of a broken heart”. Who are these doctors? Clark agrees to be their adopted son, because we need a plot-of-the-month, I suppose. Unlike the Kents, Clark decides to hide his true nature from his adoptive parents to make the story more interesting.

Clark makes a tape confessing his secret identity and leaves it for his new parents… then of course we get some nice action shots of Swan’s Superman… this is Action Comics after all!

In the end, Superman finds the situation unacceptable and goes off to find the lost son and bring him home to his parents so we can have a nice episodic reset. Before he leaves he “fuses” the tape with his x-ray vision and uses super-ventriloquism to fool everyone about the contents of the tape…. ooookay.