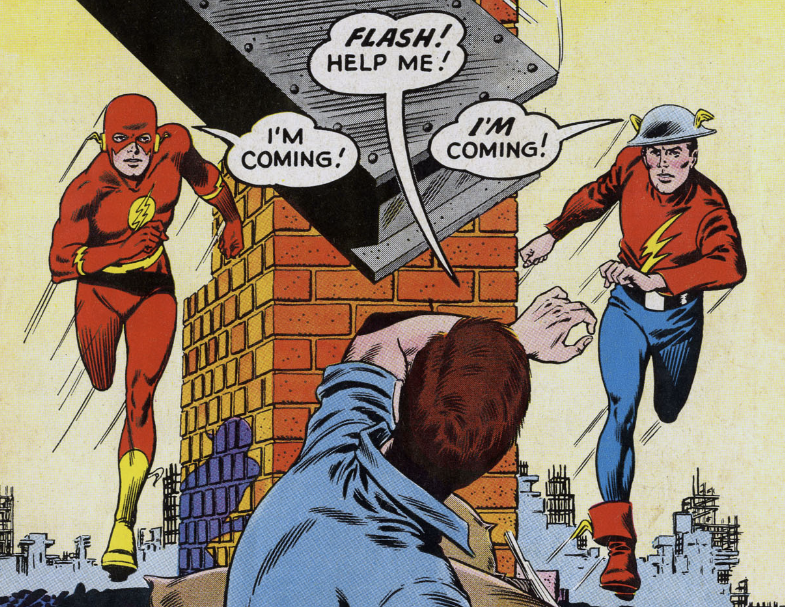 Flash Comics #123 (July 1961) has the official birth of the DC multiverse in the landmark story “Flash of Two Worlds”. After super-speed vibrating during a show for charity, Barry Allen’s Silver Age Flash finds himself in a similar-but-different world, where Central City is replaced by Keystone City. Remembering that Jay Garrick, the “fictional” inspiration for Barry’s Flash lived in Keystone City, he is astounded to find a Jay Garrick in the telephone book and calls on him.

It is then established that the Golden Age Flash lives on a parallel Earth that inspired Gardner Fox (who lives on Barry’s Earth) to write about Jay’s adventures. The comic magazine was discontinued in 1949, which Jay Garrick says aligns with his retirement. In that time he settled down and made Joan Williams his wife.

Coincidentally, Jay is thinking of coming out of retirement because three of his Golden Age villains have resurfaced: The Thinker, The Fiddler, and The Shade. Of course the Silver Age Flash agrees to help Jay out.

Jay then sees Barry off to his own universe, observing how to vibrate between the Earths so that future adventures can be set up.

The official introduction of the DC multiverse, where all its characters and stories exist on different Earths and can cross over, is like watching someone discover a treasure trove of stories and history to explore. Up to this point, DC has been reinventing Golden Age characters as Silver Age counterparts (such as the Green Lantern and Hawkman revivals), but I think this is the first time that DC realizes that their original characters can co-exist alongside the new ones – and that it’s more exciting and interesting to do so. Embrace the rich history – – don’t attempt to erase it.

Decades later, the Crisis on Infinite Earths event would attempt to wipe out the multiverse and align all DC continuity into one universe and timeline. The story itself was epic and redefined the superhero comic book genre in some ways (rebooting continuity and giant universe-altering crossovers weren’t really a thing up until that point), but DC later realized it was a mistake to deny the rich history, reintroducing the multiverse.