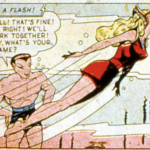 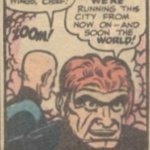 More science fiction stuff from DC in April 1947 with All-Star Comics #35. Per Degaton is introduced, who steals a time machine and goes back into the past to prevent Alexander the Great from winning a key battle in order to become ruler of the present-day Earth. As a result, technology starts to disappear in […] 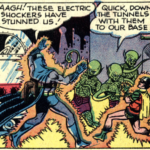 I’ve talked a bit about crazy fantastical Batman and Robin storylines before. In Batman #41 (April 1947), we get the first truly far-out-there storyline, “Batman, Interplanetary Policeman”. Bruce Wayne and Dick Grayson are identified as Batman and Robin by Martian alien scientists visiting Earth. These scientists have observed Batman and Robin for years with their […]

In Sensation Comics #66 (April 1947), Steve Trevor is shot and killed accidentally by a kid playing with his father’s gun. In a fit of grief, Wonder Woman rushes Steve to Paula von Gunther, who uses the purple ray to heal Steve. Phew, I really thought Wonder Woman’s love interest and most important supporting cast […] 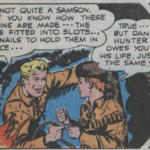 Tomahawk, and his trusty young sidekick Dan Hunter, debut in Star Spangled Comics #69 (April 1947). As a young pioneer in Kentucky, Tom Hawk was captured by “Indians”, but after saving some of their people from a rampaging moose, was befriended, given the nickname “Tomahawk” and taught their ways. Later, he defended an American outpost […] 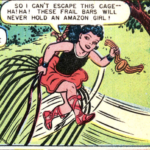 In Wonder Woman #23 (March 1947), Queen Hippolyta shows what amounts to be a “home movie” of Diana as a seven-year old girl who bests alien invaders and rescues Amazons. This is the first appearance of Wonder Girl. Versions of Wonder Woman at various young ages become a popular story-telling device in the pages of […]

EC Comics began to expand its lineup beyond educational comics in the late 1940s. In early 1947, EC launched the first set of “Entertaining Comics” including International Comics #1 (February 1947). International featured a series of adventure-type stories, including Van Manhattan, “America’s newest supersleuth”. Van Manhattan was joined by Igor the Archer, Juan Meatball, and […] 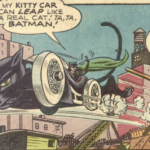 In Detective Comics #122 (February 1947), the Catwoman returns again to plague Gotham City with her “black cat” crimes. Her “Kitty Car” is introduced which seems to have more power and gadgetry than the Batmobile… how?!? The story also brings back her black hair, I guess she got tired of being a blonde while in […] 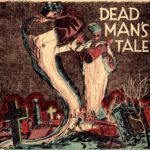 In January 1947, Avon Periodicals published Eerie Comics #1, a one-shot horror comic. The comic features anthological horror stories and (as Wikipedia says) is “credited with establishing the horror comics genre” that EC Comics came to dominate. I have to also give credit to “Just a Story” (DC) and “The Spirit” (Quality) as contributing to […] 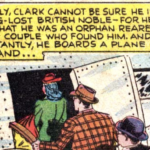 In Action Comics #106 (January 1947), Clark is told he is a long-lost heir to an English barony. But what’s interesting (as a reader 70 years later) is the blurb in which it is revealed that Clark doesn’t even know he is not human. At this point in his history, Clark does not know anything […]