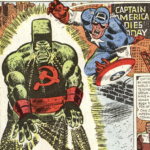 In Captain America #78 (May 1954), Atlas (Marvel) continues to try to make their superheroes exciting by adding new super-villains. This time, the Commies create their own version of a “super soldier” to square off against Captain America. Ivan Kronov is given electrical powers and the name Electro. Like electric cars, he has one slight […] 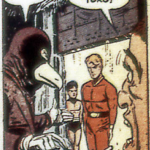 The Human Torch and Toro are not the only ones who have returned from the Golden Age. One of the Golden Age villains called “The Vulture” makes an appearance. Actually it’s not clear this is the same Vulture that appeared back during World War II, since that was a Captain America villain, but nonetheless it […] 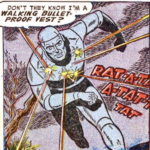 In “The Human War Machine!”, a story in Detective Comics #202 (Oct 1953), the Golden Age Robotman (Robert Crane) makes his final appearance. In it, he shows off some of his powers one last time. Including being bullet-proof: As well as having stretchable arms? DC will later revive the name and the concept with the […]

Atlas (Marvel) Comics had quite a few publications (more than DC) throughout the Golden and Early Silver many of which were driven by Stan Lee. In the anthological Adventures Into Weird Worlds #11 (July 1952), a one-shot villain named “Swami Mordo” makes an appearance, who shares a name and some characteristics of one of Doctor […] 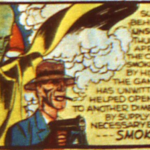 As I mentioned before, I never knew there were so many Marvel Comics characters named after obscure Golden Age characters they had introduced decades earlier*. Marvel Mystery Comics #13 (September 1940), introduced a new hero to Timely/Marvel’s Golden Age of Comics: The Vision. No, not the android from the 1960s, but an alien from Jupiter […] 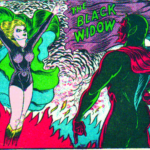 In Mystic Comics #4 (June 1940), Timely Comics Inc (later Marvel) introduces the first costumed female superhero, Black Widow. Claire Voyant is a spiritual medium who is overcome by evil powers while performing a seance. She puts “Satan’s curse” on the family who later die in a car crash. The surviving brother murders Claire and […]